Kosovo Polje 1989:
600th anniversary of the Battle of Kosovo
SLOBODAN MILOSEVIC:DISCORD IS A SERBIAN DISASTER 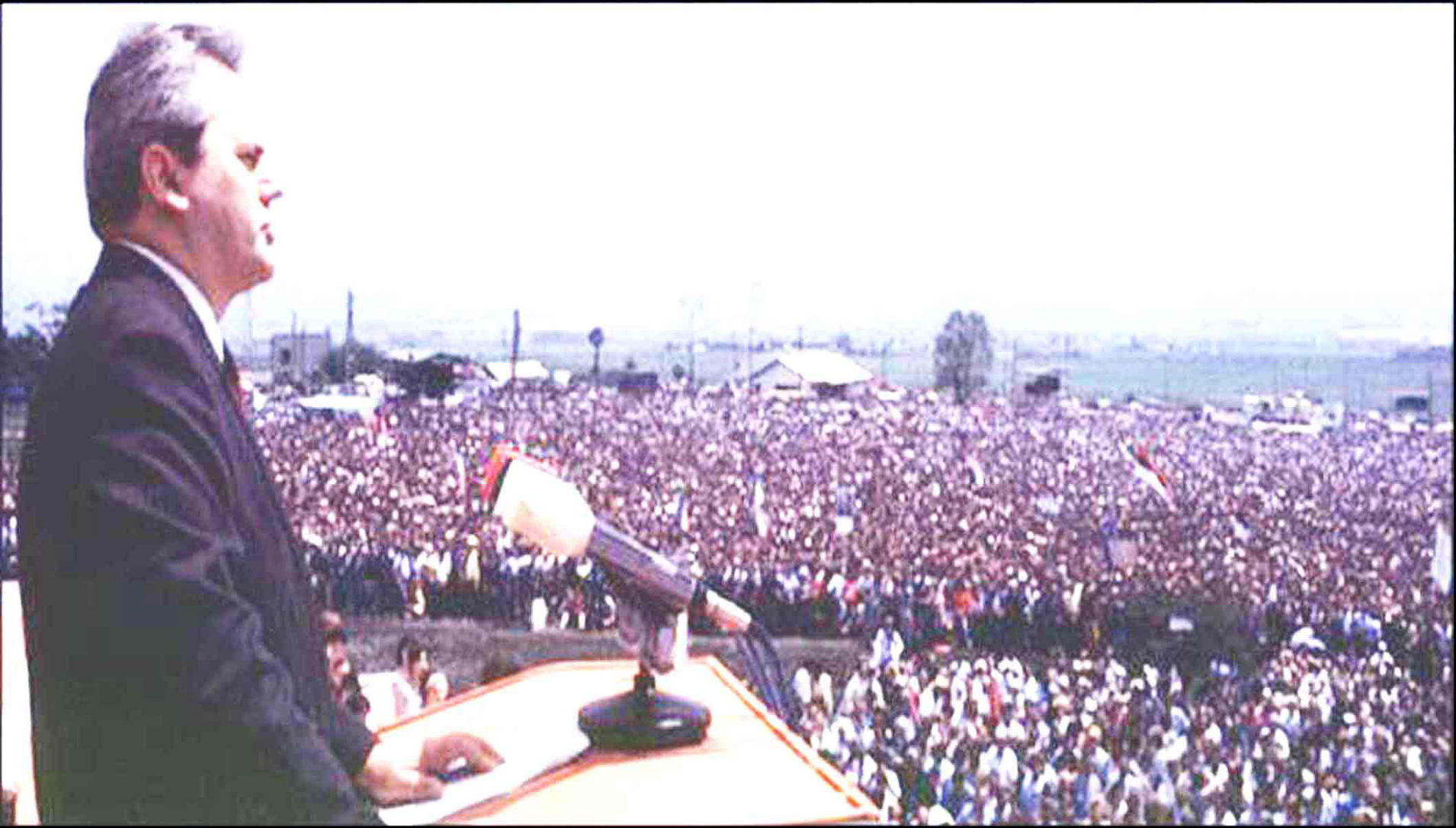 By the force of social circumstances this great 600th anniversary of the Battle of Kosovo is taking place in a year in which Serbia, after many years, after many decades, has regained its state, national, and spiritual integrity. Therefore, it is not difficult for us to answer today the old question: how are we going to face Milos? [Milos Obilic, legendary hero of the Battle of Kosovo.] Through the play of history and life, it seems as if Serbia has, precisely in this year, in 1989, regained its state and its dignity and thus has celebrated an event of the distant past which has a great historical and symbolic significance for its future.

Today, it is difficult to say what is the historical truth about the Battle of Kosovo and what is legend. Today this is no longer important. Oppressed by pain and filled with hope, the people used to remember and to forget, as, after all, all people in the world do, and it was ashamed of treachery and glorified heroism. Therefore it is difficult to say today whether the Battle of Kosovo was a defeat or a victory for the Serbian people, whether thanks to it we fell into slavery or we survived in this slavery. The answers to those questions will be constantly sought by science and the people. What has been certain through all the centuries until our time today is that disharmony struck Kosovo 600 years ago. If we lost the battle, then this was not only the result of social superiority and the armed advantage of the Ottoman Empire but also of the tragic disunity in the leadership of the Serbian state at that time. In that distant 1389, the Ottoman Empire was not only stronger than that of the Serbs but it was also more fortunate than the Serbian kingdom.

The lack of unity and betrayal in Kosovo will continue to follow the Serbian people like an evil fate through the whole of its history. Even in the last war, this lack of unity and betrayal led the Serbian people and Serbia into agony, the consequences of which in the historical and moral sense exceeded fascist aggression. Even later, when a socialist Yugoslavia was set up, in this new state the Serbian leadership remained divided, prone to compromise to the detriment of its own people. The concessions that many Serbian leaders made at the expense of their people could not be accepted historically and ethically by any nation in the world, especially because the Serbs have never in the whole of their history conquered and exploited others. Their national and historical being has been liberational throughout the whole of history and through two world wars, as it is today. They liberated themselves and when they could they also helped others to liberate themselves. The fact that in this region they are a major nation is not a Serbian sin or shame; this is an advantage which they have not used against others, but I must say that here, in this big, legendary field of Kosovo, the Serbs have not used the advantage of being great for their own benefit either.

Thanks to their leaders and politicians and their vassal mentality they felt guilty before themselves and others. This situation lasted for decades, it lasted for years and here we are now at the field of Kosovo to say that this is no longer the case.

Serbia of today is united and equal to other republics and prepared to do everything to improve its financial and social position and that of all its citizens. If there is unity, cooperation, and seriousness, it will succeed in doing so. This is why the optimism that is now present in Serbia to a considerable extent regarding the future days is realistic, also because it is based on freedom, which makes it possible for all people to express their positive, creative and humane abilities aimed at furthering social and personal life.

Serbia has never had only Serbs living in it. Today, more than in the past, members of other peoples and nationalities also live in it. This is not a disadvantage for Serbia. I am truly convinced that it is its advantage. National composition of almost all countries in the world today, particularly developed ones, has also been changing in this direction. Citizens of different nationalities, religions, and races have been living together more and more frequently and more and more successfully.

Socialism in particular, being a progressive and just democratic society, should not allow people to be divided in the national and religious respect. The only differences one can and should allow in socialism are between hard working people and idlers and between honest people and dishonest people. Therefore, all people in Serbia who live from their own work, honestly, respecting other people and other nations, are in their own republic.

After all, our entire country should be set up on the basis of such principles. Yugoslavia is a multinational community and it can survive only under the conditions of full equality for all nations that live in it.

The crisis that hit Yugoslavia has brought about national divisions, but also social, cultural, religious and many other less important ones. Among all these divisions, nationalist ones have shown themselves to be the most dramatic. Resolving them will make it easier to remove other divisions and mitigate the consequences they have created.

For as long as multinational communities have existed, their weak point has always been the relations between different nations. The threat is that the question of one nation being endangered by the others can be posed one day -- and this can then start a wave of suspicions, accusations, and intolerance, a wave that invariably grows and is difficult to stop. This threat has been hanging like a sword over our heads all the time. Internal and external enemies of multi-national communities are aware of this and therefore they organize their activity against multinational societies mostly by fomenting national conflicts. At this moment, we in Yugoslavia are behaving as if we have never had such an experience and as if in our recent and distant past we have never experienced the worst tragedy of national conflicts that a society can experience and still survive.

Equal and harmonious relations among Yugoslav peoples are a necessary condition for the existence of Yugoslavia and for it to find its way out of the crisis and, in particular, they are a necessary condition for its economic and social prosperity. In this respect Yugoslavia does not stand out from the social milieu of the contemporary, particularly the developed, world. This world is more and more marked by national tolerance, national cooperation, and even national equality. The modern economic and technological, as well as political and cultural development, has guided various peoples toward each other, has made them interdependent and increasingly has made them equal as well [medjusobno ravnopravni]. Equal and united people can above all become a part of the civilization toward which mankind is moving. If we cannot be at the head of the column leading to such a civilization, there is certainly no need for us to be at is tail.

At the time when this famous historical battle was fought in Kosovo, the people were looking at the stars, expecting aid from them. Now, 6 centuries later, they are looking at the stars again, waiting to conquer them. On the first occasion, they could allow themselves to be disunited and to have hatred and treason because they lived in smaller, weakly interlinked worlds. Now, as people on this planet, they cannot conquer even their own planet if they are not united, let alone other planets, unless they live in mutual harmony and solidarity.

Therefore, words devoted to unity, solidarity, and cooperation among people have no greater significance anywhere on the soil of our motherland than they have here in the field of Kosovo, which is a symbol of disunity and treason.

In the memory of the Serbian people, this disunity was decisive in causing the loss of the battle and in bringing about the fate which Serbia suffered for a full 6 centuries.

Even if it were not so, from a historical point of view, it remains certain that the people regarded disunity as its greatest disaster. Therefore it is the obligation of the people to remove disunity, so that they may protect themselves from defeats, failures, and stagnation in the future.

This year, the Serbian people became aware of the necessity of their mutual harmony as the indispensable condition for their present life and further development.

I am convinced that this awareness of harmony and unity will make it possible for Serbia not only to function as a state but to function as a successful state. Therefore I think that it makes sense to say this here in Kosovo, where that disunity once upon a time tragically pushed back Serbia for centuries and endangered it, and where renewed unity may advance it and may return dignity to it. Such an awareness about mutual relations constitutes an elementary necessity for Yugoslavia, too, for its fate is in the joined hands of all its peoples. The Kosovo heroism has been inspiring our creativity for 6 centuries, and has been feeding our pride and does not allow us to forget that at one time we were an army great, brave, and proud, one of the few that remained undefeated when losing.

Six centuries later, now, we are being again engaged in battles and are facing battles. They are not armed battles, although such things cannot be excluded yet. However, regardless of what kind of battles they are, they cannot be won without resolve, bravery, and sacrifice, without the noble qualities that were present here in the field of Kosovo in the days past. Our chief battle now concerns implementing the economic, political, cultural, and general social prosperity, finding a quicker and more successful approach to a civilization in which people will live in the 21st century. For this battle, we certainly need heroism, of course of a somewhat different kind, but that courage without which nothing serious and great can be achieved remains unchanged and remains urgently necessary.

Six centuries ago, Serbia heroically defended itself in the field of Kosovo, but it also defended Europe. Serbia was at that time the bastion that defended the European culture, religion, and European society in general. Therefore today it appears not only unjust but even unhistorical and completely absurd to talk about Serbia's belonging to Europe. Serbia has been a part of Europe incessantly, now just as much as it was in the past, of course, in its own way, but in a way that in the historical sense never deprived it of dignity. In this spirit we now endeavor to build a society, rich and democratic, and thus to contribute to the prosperity of this beautiful country, this unjustly suffering country, but also to contribute to the efforts of all the progressive people of our age that they make for a better and happier world.